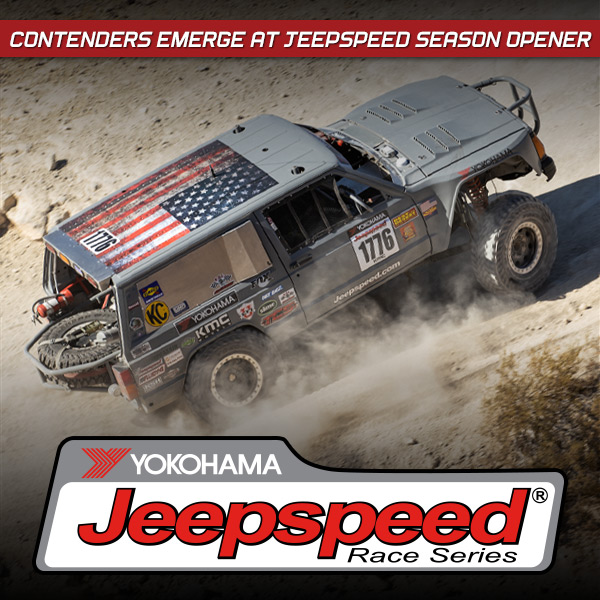 Laughlin, NV Off road racing is about overcoming challenges. It takes an immense amount of work just to get a vehicle to the starting line. Then you proceed to beat it up in some of the most hostile landscapes on earth. That’s why a win or podium finish is so rewarding. You have sacrificed, struggled, and come out on top against incredible odds. It’s the challenge, and the bond that’s formed those who stand with you that makes it so worthwhile. 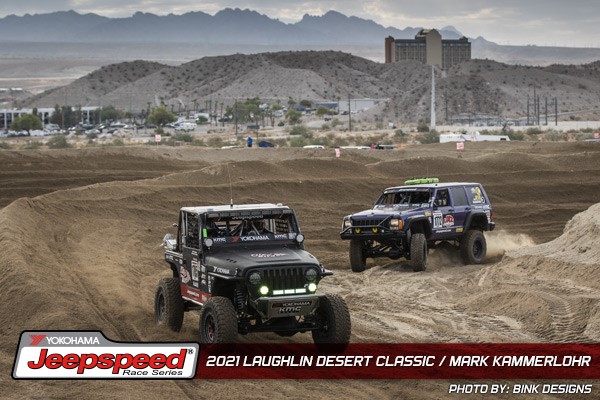 At the Best in the Desert King Shocks Laughlin Desert Classic, several Jeepspeed teams achieved their goals after working so hard to get there. In class 1700 Jeepspeed Challenge, Kyle Gieselmann came out on top after two days of racing, and nearly two years of struggling with parts availability due to covid. He rolled his Jeep before the pandemic, and persevered through all the uncertainty of the last year to get his truck ready to race again. “It felt great to win in Laughlin,” said Kyle. “We finished 6th place on day one, but made up 17 seconds on day 2 to finish 2nd, and take the overall win. We heard on the radio that everyone was struggling so we ran our own pace to bring it home. I think the course was faster on day 2. The big trucks knocked all the square edges down. We were able to make adjustments for day 2, and they all worked good for us. After the engine problems we’ve had for the last 2 years, we are finally heading in the right direction. We hope to follow up this performance in Parker, and then make a run for the championship next season. When the truck stays together, we can run at the front. Getting this win makes all the hard work worth it. Our team is family and friends, so anyone who puts in work, gets a chance to ride during the race. I got the truck really cheap when I was 16 years old, and besides the engine problems it’s been totally fun. My Dad helps out a lot; it’s a family affair. He used to race class 7 stock trucks so I’ve spent my whole life around off road racing.” 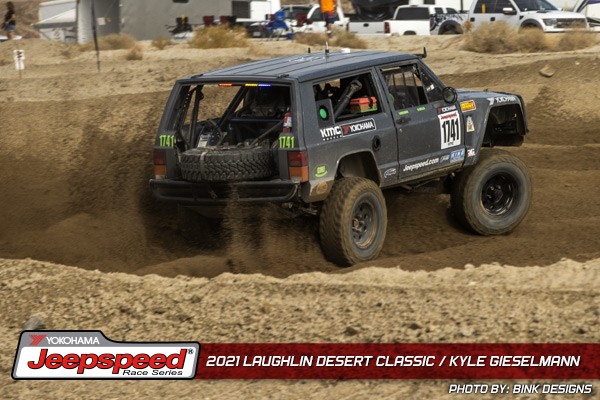 2nd place overall in Jeepspeed Challenge class, Joel Minor, put in equal amounts of perseverance, and grit to get his Jeep on the podium. “It didn’t look good for us on Saturday,” said Joel. “We were running really hot. During pre-race testing, we lost the transmission so we showed up to race with no test time. We’ve suffered 3 DNF’s in a row so our goal was to get it to the finish. For Sunday’s race we backed down the timing trying to keep it cool. I guess the junkyard motor is not happy. This Jeep is new to us so we had to do a bunch of work on it. We tore off the front suspension because we like running in 4 wheel drive. We get friends and family together on the weekends to work on the truck. Friends, and family are why the Jeepspeed series is so much fun. With all that goes on in life it’s usually last minute, but we always show up, and hope to get a good result. This podium is our best finish ever! Thanks go out to The Wright Painting Company for all of the support getting us to our best finish yet. If you come by our pit it’s always full of our family, and friends that show up to support us. Whether we put it on the box, or only get down the road a couple miles, I can’t thank each of them enough.” 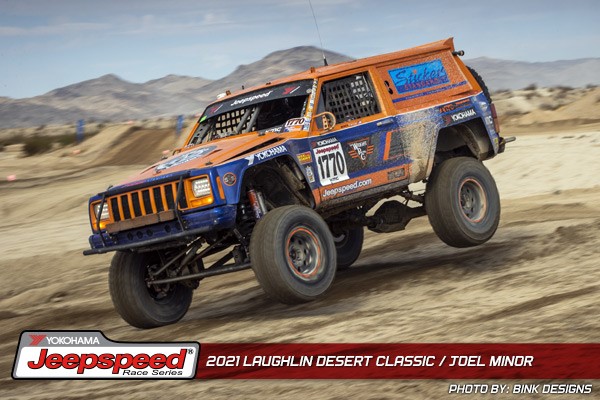 “Friday went well, my 2 year old grandson Parker got to tech his Power Wheels Jeep and Adam (Tichy) won the coin toss, and chose to drive Saturday,” says 4th place finisher Ken Tichy. “All went well on Saturday other than we lost the GPS early in the first lap. We had to slow up some in the dust on the back side of the track. Adam did a great job driving, and brought the "School Bus" to the podium in what looks like fourth place. Sunday was a different story. My turn to drive, and we got the hole shot on the class 7 truck that started next to us. We held off the 7 truck until around mile 6 when the motor died, and all electrical was off. We did a quick look over and decided to have BITD retrieval drag us to the hot pit. The pit crew jumped in and thanks to Wayne Guidinger from the Wolfpack team, found and replaced the burnt wire. We finished our first lap to a white flag and were off to lap two, the new motor was strong and with clean air we were flying. About a mile from the hot pit, Adam radioed in to send Mark out in the 1785 who was holding in the pit to cool off the overheated transmission as Mark is in the hunt for the championship this year and we are middle of the pack. We finished our lap two to a checkered flag and thanks to the Grand Prix finish ended our day with a third place for 1785 and fourth for 1706. Go team "Shake and Bake". All and all it was a great weekend of racing! Thank you Jeepspeed Mike, Mark and Michelle for all your hard work to make this series happen. A special thanks to our pit crew John, Danny and Jim and to our families who put up with us chasing each other around the desert. See you in Parker!” 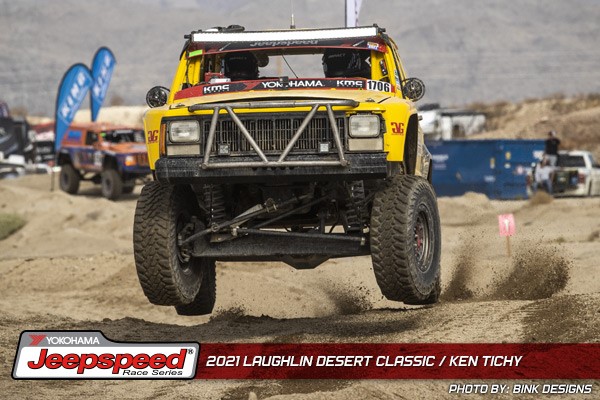 Both Gieselmann, and Minor finished ahead of the much faster 3700 truck of Chris Mortensen, and Jerry Simonson in the overall standings. Mark Kammerlohr was on the podium again; he finished 3rd in Jeepspeed Challenge. Kammerlohr is the points leader heading into the final race in Parker. The frantic pace at Laughlin was too much for Steve Palmieri, Tim Martin, and Scott Biehl who all suffered DNF’s. It was a heated battle every step of the way. Chris Mortensen, and Jerry Simonson ran unopposed in class 3700 Jeepspeed Outlaws Modified, but they still had to contend with the terrain, which always extracts a heavy price. Having another truck to pace is a huge asset. You never know if you’re running too hard a pace until it’s usually too late. The terrain is always going to be tough, and the truck will always take a beating. Knowing how hard to push, and what the truck is capable of withstanding takes lots of time behind the wheel and a finely calibrated posterior. The best drivers can feel the truck under them, and know when they are pushing too hard. Mortensen, and Simonson are both capable in that way. Currently Jerry Simonson leads the way in the 3700 points standings, and Chris Mortensen is second. 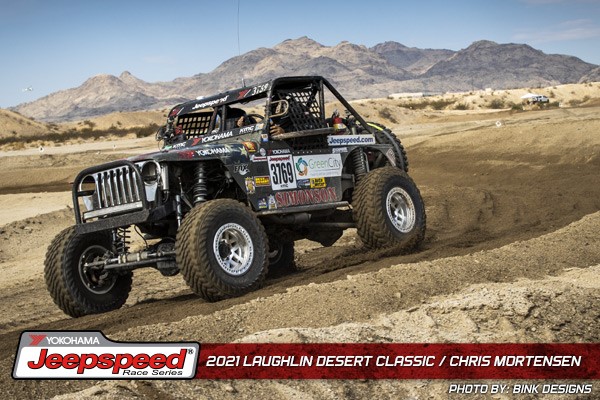 Speaking of points leaders, the team of Andrew Hulse, Wayne Guidinger, and Michael Kraft, plus their many friends, and family members that make up the “Wolfpack” have been having a fantastic season so far. They’ve managed to climb to the top of the points standings against the heavy hitters in the 4700 open Jeepspeed Trophy Class. Because their team has so many members, they do more driver, and co-drivers changes than anyone, and still post solid results every race. Their competition includes several multi-time champions, and the fastest drivers in the Jeepspeed series. The “Wolfpack” got their first win at Vegas to Reno, the longest race of the season, and backed it up with their second straight in Laughlin; a sprint race. One statistic that doesn’t show up is the amount of fun they are having doing it. If they continue with this success, and take the championship this year I can only imagine how much fun the victory celebration will be. Of course, it’s way too soon to start the party. There are plenty of Jeepspeed racers in the 4700 class that are just as capable. In Laughlin, it was Jeff Harmonson who made them earn the victory. Harmonson finished second place in the overall standings, and is also second place in the season standings. It’s going to be a huge battle between the two teams in Parker; plus the other heavy hitters with no points championship on the line will be on a mission to get one more win in 2021. 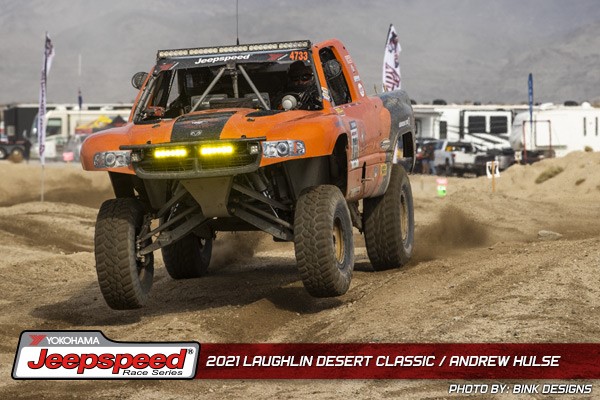 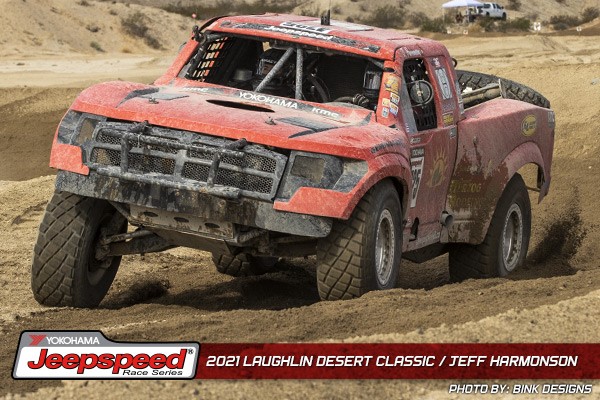 Find us on Social Media!